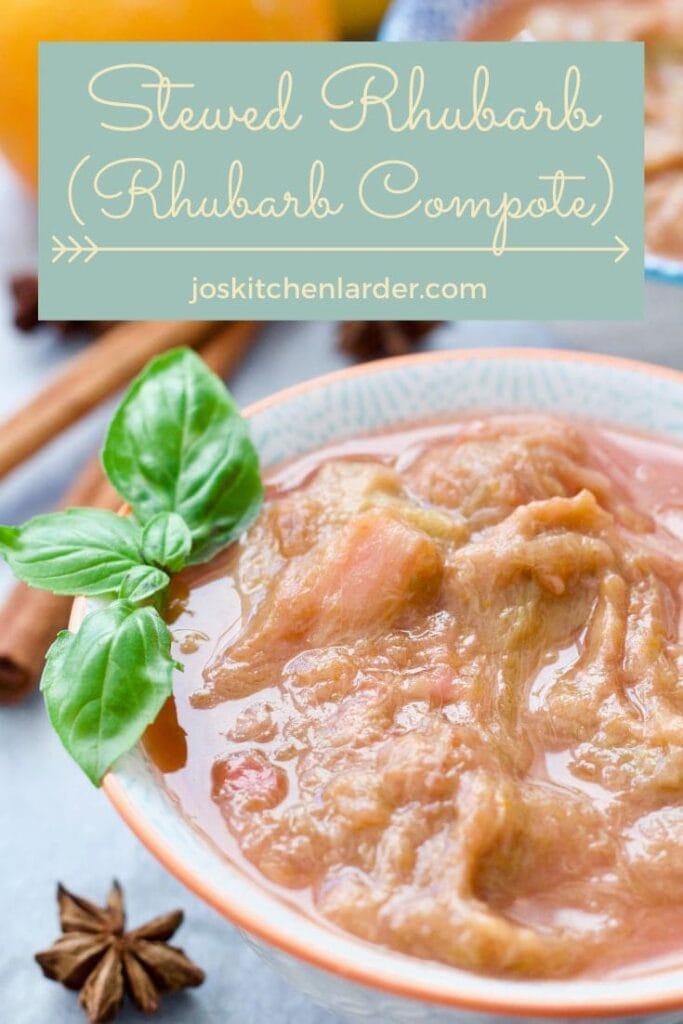 Simple and delicious this basic stewed rhubarb recipe requires only 3 ingredients with extra flavourings as needed to suit your mood & taste. Extremely versatile topping, filling or even dessert in its own right you won’t be able to get enough of.

Being a fan of stewed fruit of all kind, stewed rhubarb is the firm favourite I make in large batches at the height of the season to enjoy throughout the year.

The season for rhubarb is actually pretty long with forced rhubarb available from December through to March only to then be replaced by field grown rhubarb between April and September. Despite that, I still like to have a little stash of my stewed rhubarb in the freezer to enjoy as and when I feel like.

Sometimes the simplest of recipes are the best, the ones that require only handful (if that) of ingredients.

For my stewed rhubarb (rhubarb compote) I use only 3 basic ingredients:

Orange (juice & zest) – If you don’t have oranges, use 5 Tbsp of orange juice instead. Feel free to use lemon zest instead of orange if you’ve got one.

Demerara Sugar – I like using demerara sugar for its caramel like flavour but any type of sugar will do.

To be honest you could even use water instead of orange juice and skip zest altogether for even simpler affair but I do like that gentle citrus tang that orange gives you here.

I’ve come across quite a few recipes that call for adding extra water together with orange juice but I don’t think it’s necessary as rhubarb releases enough juices the moment you start cooking it.

Having said that, I do very often play around with some extra additions and flavourings for that bit of extra special flavour and my favourite ones are:

Star Anise – I love its almost perfume like aroma, it reminds me of Christmas

Freshly Grated Ginger – use as much or as little as you like, depending on how spicy you want your stewed rhubarb to be.

I would say choose one extra flavouring per batch instead of combining them all with star anise and cinnamon being one exception I happily use together.

Can you freeze stewed rhubarb?

Absolutely! Simply portion it as per your needs and freeze for up to a year!

I mainly use stewed rhubarb as a topping for my porridge or to have with granola and yogurt in the morning so I usually freeze it in these small, freezer safe containers* which are perfect for my needs.

If you’d rather freeze smaller portions, you could use these cool, lidded ice cube trays*. They will give you a better control of the amount you want to use as you simply defrost as many or as few cubes of stewed rhubarb as you need. No waste here!

How long does stewed rhubarb last?

Stewed rhubarb should last in your fridge for a couple of weeks.

Make sure you cool and store it in the fridge as soon as possible. To prolong its fridge life only reheat the amount you require, keeping the rest in the fridge.

For me it’s all about breakfast! I tend to have it warm as a topping and sweetener for my porridge or cold with yogurt and homemade granola (recipe coming soon).

It doesn’t stop at at breakfast though, oh no. You can use it to create some simple and delicious desserts too:

How to make stewed rhubarb – step by step instructions

This recipe couldn’t be easier to throw together! You really have to love it for almost zero effort!

Have you tried my Stewed Rhubarb Recipe?

Please leave a comment to let me know what you thought, share your tips, tricks etc. If you have any questions, feel free to ask away too and I’ll try and respond as soon as I can.

If you’ve made this recipe please rate it too! Thank you in advance!

Find me on social media

Never miss another recipe by subscribing to our newsletter today. 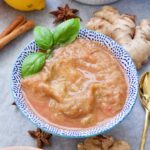 Please leave a comment & rating if you've made my recipe! Feel free to ask questions too, I reply to all! Cancel reply

This site uses Akismet to reduce spam. Learn how your comment data is processed.

Hi! I’m Jo and this blog is where I share lots of simple, family friendly recipes we enjoy eating and now you can easily recreate at home.
Read More ➝